With the launch of our Hands of Georgia pre-collection, we bring you a taster of the conversation between Sally and Hannah. Read the full interview in our magazine, out in September

Sally: We heard about the exhibition a year ago, and for us it was really exciting – the sense of colour and Georgia herself was really inspiring to us. When we started to do our research and discovered all the photographs from her husband Alfred Stieglitz and her as a personality, it became a really moving journey for us. We looked at her much more as a person and a style icon; seeing her always dressed in black and white, in these simple clothes, with the kimono and the layered white lapels, and her canvases in full colour behind her – that was a really interesting contrast.

Hannah: Absolutely. O’Keeffe had such an incredible sense of how she wanted to appear in the world – her hair, her clothes. It was often remarked by her contemporaries that she didn’t look like other women. She was never ladylike, but what she was, was modern. She had a very specific sense of her being in the world, which was conveyed through her clothes. She knew her best features; she wore deep Vs and flat shoes. This was not how women tended to dress in 1918.

Sally: Yes, I always like to describe her as a handsome woman. She was attractive but not pretty. Every outfit she wore is still relevant today. She had a bit of Chanel about her.

Sally: She had a uniform. Like artists and designers. You create a blank canvas for your work so it doesn’t distract you. 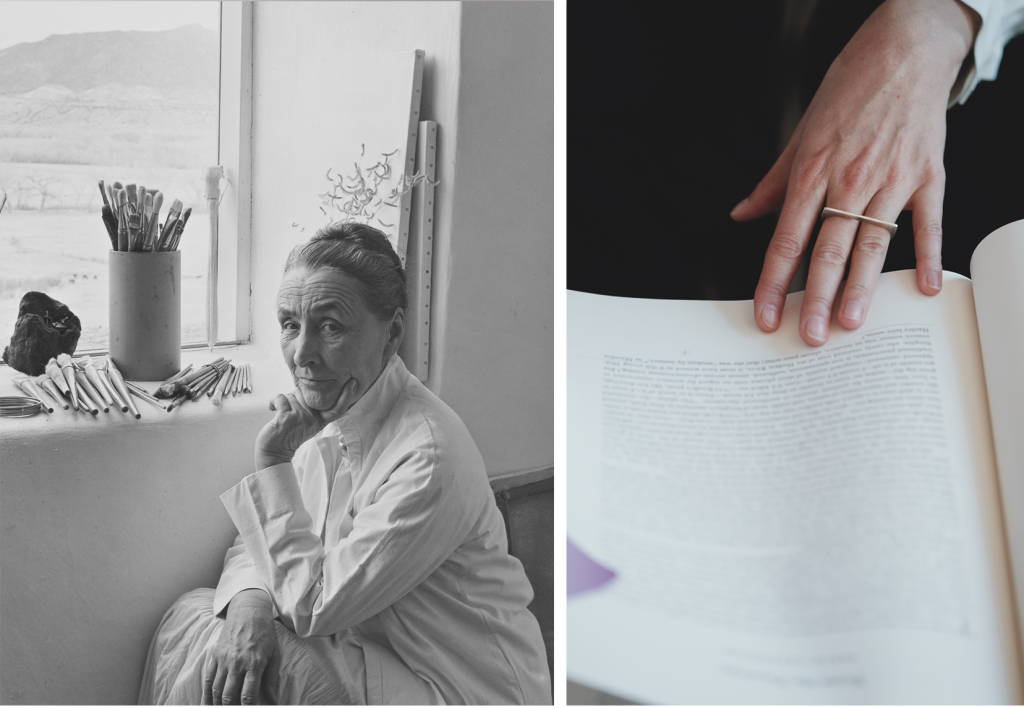 THE HANDS OF GEORGIA AND THE (FALSE) FREUDIAN INTERPRETATIONS

Sally: The play on Georgia’s hands was the most profound thing for us. They represent her as an artist, so her hands became very poignant in the photos taken by Stieglitz.

Hannah: Yes, Stieglitz took a number of photos focusing on her hands. It’s about focusing on them as her source of creativity.
Sally: My take on Stieglitz was that he was a PR man for her. She created her art for the love of it, whereas he could see what to say about her work, how to make it more controversial.

Hannah: I think she played a more active role than we give her credit for. Stieglitz was very influential, one of the most accomplished photographers of the 20th century, but O’Keeffe was a collaborator in these photographs of her. It’s not Stieglitz putting O’Keeffe in poses she wasn’t comfortable with, she was very much part of the project which gives a sense of their relationship. Yes, Stieglitz was very influential but it wouldn’t have been possible without her determination.

Hannah: Yes, Stieglitz was undoubtedly the reason O’Keeffe rose to such success early on, but she was crucial to the financial stability of his galleries. She had her shows reviewed in 1917 – she was very, very savvy. Stieglitz was an incredible advocate and ruthless in his promotion of O’Keeffe, but it’s also his early interpretations of her work that have shaped how most people view her work. She disagreed with them often, the psychoanalytic interpretations. He was an advocate but also one of the reasons for the misconceptions which we are trying to break through in this exhibition and show what O’Keeffe actually said. 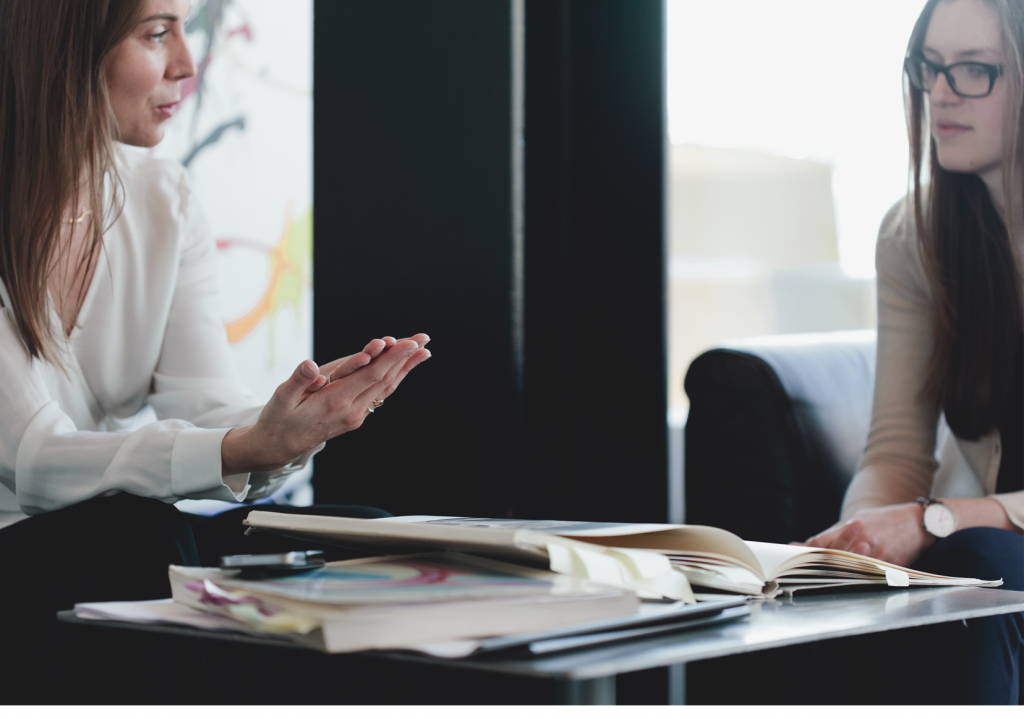 With these Freudian interpretations of her work – seeing her abstractions in nature as representations of the womb – O’Keeffe made a deliberate decision to move away from this and turn to recognisable subjects. She fought these interpretations during her entire life, refuted them throughout her career. She refused to accept that her work was gendered. One of the main objectives of the show is to dispel these myths.

Sally: She really looked up to Stieglitz, didn’t she?

Hannah: Yes, she did. She had incredible respect for him. They influenced each other.

Sally: She sounds so sensitive in her letters to Stieglitz; her way of speaking is so poetic

THE PROCESS BEHIND THE PRE-COLLECTION

Sally: We thought it would be interesting to approach some contemporary artists to see what their take on Georgia was [as part of our seasonal Creators project]. The first we contacted was Rob Philipps, who is a figurative illustrator and creative director of the London College of Fashion. He captures her eyes, the wisdom behind them [in his illustration for the collection].

Hannah: She often looks quite stern! There are rare photos of her smiling! When you see them, it’s kind of shocking.

Sally: Yes, it changes your interpretation of the other photos. We also approached Sam Kerr [as part of the Creators project]. We were very transfixed with her hands, as was Sam, and what he does is create tessellations. It’s a contemporary way of looking at her hands in the pretty colours.

Then…her in the kimono dress with the white lapels underneath…so we created some cotton shirts that sit underneath a kimono jacket with utility details and made a real point of the way things layer up. Her style was so easy to interpret into a modern wardrobe; it felt very natural.

Hannah: She’s a bit of a gift, that way I think!

Sally: Yes, she is! It was such a joy for me; a treasure trove waiting to be discovered. 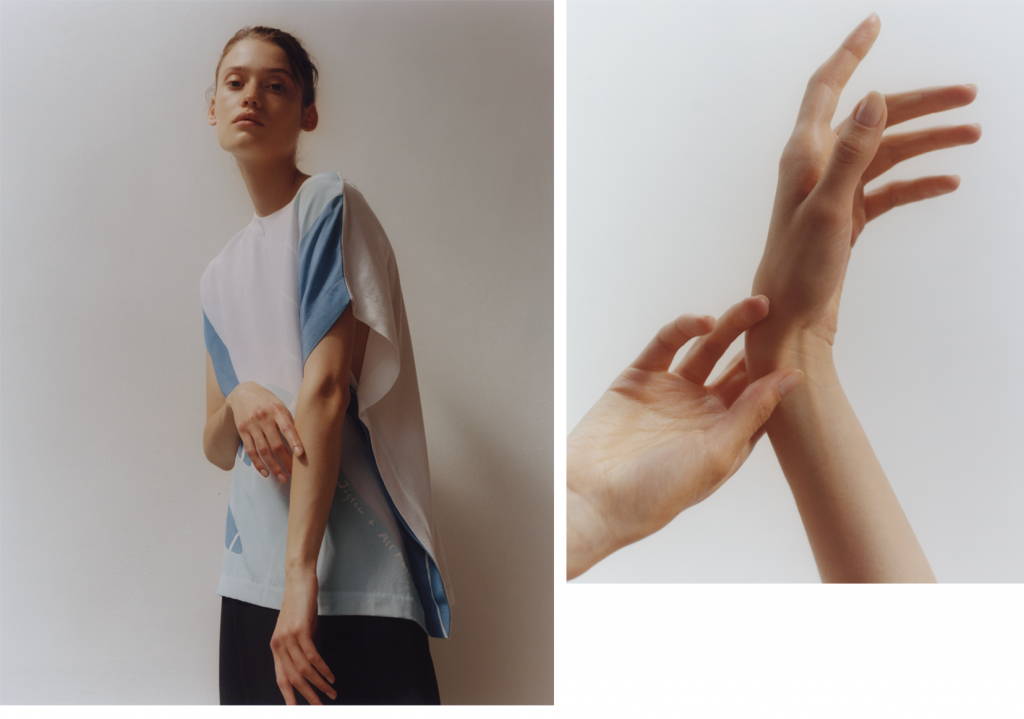